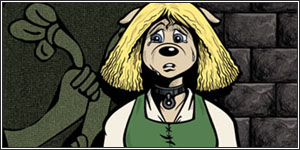 Information : Wynnifred is a young woman who was once enrolled at the Mage Academy. While previously a member of a minor noble house, Wynnie was born a peasant. When she started to show a talent for magic at the age of seven, she was taken from her parents and adopted by House Laisah.

Because of her heritage, Wynnie was not welcome by many of the young ladies at court. A quiet, withdrawn woman, Wynnie is devoted to Gadel al'Gera and was deeply upset by the idea of her close friend leaving for Britain. She was also worried about what would happen to her once Gadel left. Rumors at court hint at something more than friendship between the two women.

Her fear over loosing Gadel led her to become the Dark Mage, an alias Wynnifred took while attempting to stop treaty negotiations between Britain and Astoria. Desperate to prevent Gadel from leaving, Wynnie was willing to destroy anyone who got in her way. Wynnifred's actions as the Dark Mage led to her being stripped of her rank and magic.