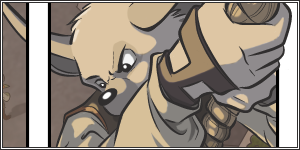 Information : Specter, Roderick's second in command, was in Ghost Division during the 1960's until he was ambushed by the Summer Court on the night of the Tithe in 1963. Dragged into Fey and imprisoned, Specter managed to escape his captors but was in Fey too long. After a few months of wandering and avoiding both Courts, he was found by Roderick and joined up with the rest of the Squadron. Specter became Roderick's second in command when his predecessor was killed in a Winter Court ambush after a Fey disguised as a RCSI courier managed to gain access to the camp.

Specter has a gruff, no-nonsense personality and often comes across as a tough person to be around. Out of all the members of the Squadron, Specter is the only one who's unwilling to discuss his past in the mortal world. No one's quite sure even how old he was when he entered Fey. While there are many speculations about why he's so tight-lipped about his pre-Fey life, few have been willing to ask him.