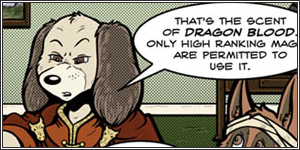 Information : Lord Saeran is one of the main supporters of the treaty between Britain and Astoria. House Midaugh is considered a very minor house in the Astorian court due to the members having limited abilities with magic. Concerned for the survival of his House, Lord Saeran was willing to agree to various terms set down by RCSI in the hopes of securing import rights. He has since come to see the current British ambassador, Lord James Gerrig, as a friend and enjoys being around the agents of RCSI, who he sees as "an amusing, fiery lot."