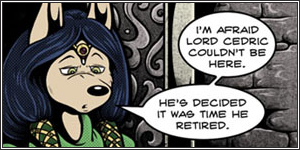 Information : Rashanna is the current head of the Astorian Mage Academy, having taken over the position after Lord Cedric stepped down. A social climber, she's been engaged in an ongoing political game against Lord Cedric for a number of years. An aggressive woman, her actions leave many in Court wondering if her only reason for supporting the treaty is because Lord Cedric does not.

Originally of House al'Melis, she married into the Royal House of al'Gera as a political tie, only to have her husband die from unknown causes soon after their union.