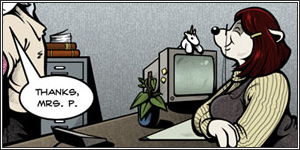 Information : Patria Pennyworth is a busy woman with a lot of responsibilities in RCSI. Not only is she the current Head of Archives and the Commander's secretary, she's also the person in charge of recruitment for RCSI as well as the one who oversees the Assistant Program. Still, despite her busy schedule, Mrs. Pennyworth always has time to see to the welfare of the assistants and archivists under her care.

Mrs. Pennyworth occasionally mentions her uncle who works for an eccentric American, but that's all. Anything more about her uncle's job she doesn't say and her uncle isn't talking.