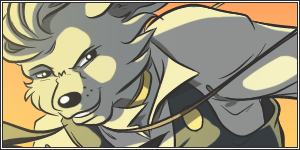 Information : A short, quiet fellow who's more dangerous than he looks, Max had a rocky start at the agency due to his rather insubordinate attitude. After an embarrassing run-in with Queen Moraine during his assistant-ship, he was shipped off to Brumborg for a year's worth of training. While less insubordinate after his stint in Brumborg, Max still questions and acts on his own motives. He's just learned to keep his thoughts, for the most part, to himself.

Max rarely talks about his family, preferring to change the subject if possible. What is known by others in the agency is that he and his father do not get along and that his family is believed to be well-to-do.

Max was trained by Davis Wright. He is the chief of Ruby Pyrenees.