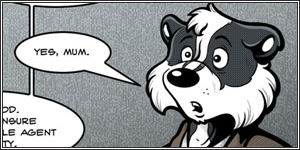 Information : Commander Boothroyd, known by many in the agency as simply CB, is a former field agent who's held the position of commander for a number of years now. Boothroyd walks with a limp due to an injury to his left leg he received during the werewolf outbreak in the 1980's. While getting on in years, he is not interested in retiring any time soon and treats any suggestions of slowing down with derision.

Boothroyd is an old friend of Queen Moraine and is one of the few members of RCSI who is willing to argue policies with her. With this gruff old man, his concerned for the welfare of his country, the agency, and his agents always comes before that of himself.