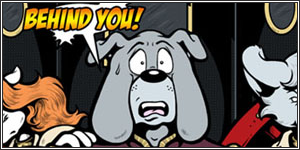 Information : Lord James is currently serving as the British ambassador to Astoria. He was previously the ambassador to Brumborg, a position he found much more agreeable than dealing with the thinly veiled threats and jabs from the Astorain court. He has many other responsibilities as ambassador, including a special one he hopes to keep secret from the agents.

He still gets frazzled in certain situations, despite being an ambassador for a number of years.