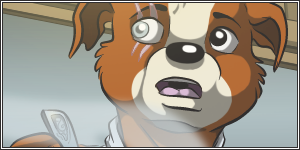 Information : After being injured by a werewolf during the outbreak in the 1980's, Ish spent three months in quarantine waiting to see if he would "turn". While he was eventually declared safe from the effects of lycanthropy, the resulting blindness in his right eye left him unable to return to field duty. He now works in the Palace as a cook.