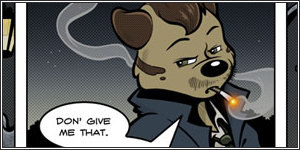 Information : Callahan is a reporter for The London Compass, the local daily gossip tabloid. If that isn't bad enough, he's also the reporter whom no one, not even the most devoted Compass reader, believes. Which is extremely upsetting, considering he's telling the truth about RCSI and the strange "collared miscreants" running about with swords.