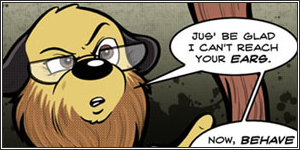 Information : Formerly a professor at Cambridge, Eric joined RCSI after one of his archaeological digs unearthed a cursed creature that began killing off his students. A short fellow, Eric is not fond of physical confrontations, preferring instead to think his way out of a crisis.

Eric was trained by Max McConnor.