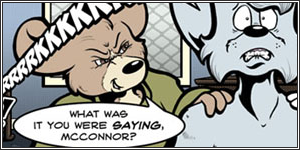 Information : Donald is a straight-laced, 'by the book' kind of guy. He's not fond of Max McConnor, who he sees as a reckless rule breaker. Their rivalry is well known among the field agents and, depending on who you talk to, is seen as either a source of amusement or annoyance. Despite Donald's best efforts, he usually comes in second to Max.

Donald is the chief of Sissy Simmons.