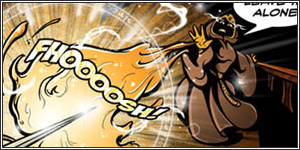 Information : The Dark Mage was an alias Wynnifred took while attempting to stop treaty negotiations between Britain and Astoria. Desperate to prevent Gadel from leaving, Wynnie was willing to destroy anyone who got in her way.

Wynnifred's actions as the Dark Mage led to her being stripped of her rank and magic.